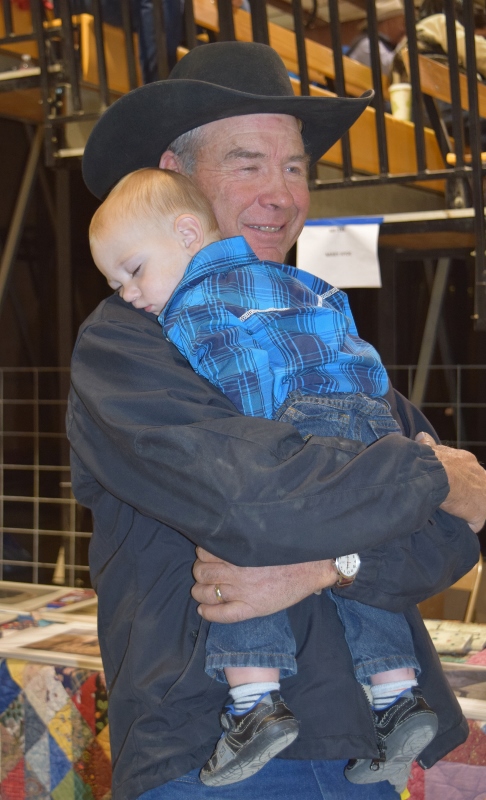 I had a blast selling photographs and calendars and handing out free signs at the Western States Ranch Rodeo Association (WSRRA) Finals this past weekend. Just for fun, I had painted up a bunch of reclaimed wood wall hangings that read “Happiness is a choice” and gave them out to anyone who wanted one.

Most everyone brightened up when I said the signs were free and they LOVED the idea, but only a fraction of those people actually took signs. We also had free doughnut holes that hardly anyone took, so I guess people weren’t into free stuff? But, those who took signs were so delighted and I received positive feedback over the giveaway in general, so it was a very rewarding experience.

I think people were mainly delighted because no one gives away free stuff anymore, unless it’s a promotional key chain or fridge magnet. That’s also what I thought, until I visited with some craftsmen at the trade show. One talented artist was signing prints for a friend to sell at another rodeo, and he told him to take whatever he felt was fair in terms of a fee, because “it’s just money; it goes in one hand and out the other.”

I talked with a cowboy musician from Canada who got his start by giving out free recordings of his songs that he’d done at his house. When he went to a rodeo, he’d just pass tapes out to everyone who was interested. I first heard his music 10 years ago, and I was totally hooked. He now sells some CDs and he said the money’s nice, but he doesn’t record music to get rich. He just wants to share his gift with others.

What a wonderfully refreshing point of view! It’s nice to know there are still people such as these two artists, who each have different gifts that enrich all who can see or hear them. Not everyone is just out to make a buck. There are still genuinely nice folks in this big ol’ crazy, high-tech, fast-paced world.

I don’t have any images from this weekend. Oh, wait, here’s one I took just because it was such a sweet moment.

As we head into a contentious election day tomorrow that has many citizens feeling uneasy (or even physically ill), it’s nice to know there are still good people. People who want to enrich the lives of other people, whether it’s through an ink drawing, a song, or a hug and a nap.

One thought on “Genuinely Nice Folks”