We went to the Legacy Ranch Horse Sale this past weekend, partly because we live on one of the ranches involved but mostly because my husband bought a new Hawaiian shirt. When you look that good in orange silk, you have to show it off. Between the short-sleeved floral shirt and his baseball cap, all of Jim’s cowboy friends did a double-take before they recognized him.

His plan to dress incognito and blend in with the idle spectators backfired, though, because he spent the afternoon helping me keep track of our two young children, both of whom are genetically similar to wind-up toys.

“Are you ready to go yet, honey?” he asked me with sweat dripping down his sideburns and a desperate look in his eye.

“We’ve only been here ten minutes,” I replied.

“Is that all? I’ve branded calves all day on the desert and not been this exhausted.”

I smiled demurely, then fixed my lipstick while changing a diaper. There’s no way I could flank calves all day and keep up with my husband, but I am in shape and conditioned to keeping up with hyperactive kids.

I followed my kids up, down, through, and back around the grandstands while trying to recognize the handful of locals I’d connected with online by their Facebook profile pictures. I hoped Amy was wearing her nose ring and at least part of her forearm tattoo showing. It would be even better if her face was located in a one-inch square and had her name above it. I was really hoping the editor with whom I had exchanged several emails had a pen behind her ear, stress wrinkles across her forehead and was chain smoking cigarettes. Because that’s how editors are supposed to look, right?

She wasn’t chain smoking, but I ran into Jennifer, a friend and writing mentor who I recognized without the aid of social media interface. I was able to sit down with her for a lengthy chat uninterrupted by my children, since my husband thought I was using the restroom and thus had taken our kids for a walk.

Pro tip: Keep your cell phone in your hand when employing this evasive maneuver. That way, when your frazzled spouse shows up carrying a screaming toddler while dragging a 4-year-old by the hand and asks “Where have you been?” you can reply “I was just about to call you!”

Full disclosure: They won’t believe this line. Because they have kids, too.

Our kids may be rowdy, but I like to think they’re just exhibiting typical kid behavior. Our toddler son only growled at a random stranger once, so we are pleased with how his social skills are developing. He and his sister will stand naked in the front yard and howl at a pack of nearby coyotes until the varmints fall into confused silence, but they are inexperienced in commonplace human social interactions such as – well, not growling at other humans. Our four-year-old, Grace, didn’t growl even once and kept all her clothes on while we were in public. I’m thinking of having a bumper sticker made to commemorate the occasion.

I have no pictures from our family outing at the horse sale, because apparently I am the world’s most unprepared blogger. Many friendly strangers have pictures of my son, because he wore his boots, spurs, Wranglers and hat and charmed the socks off of everybody. So, here’s a picture of a happy buyer and a pretty horse from the sale. Because while my husband and I were chasing our kids, three northern Arizona ranches sold a whole bunch of quality ranch horses. Unlike my children, they are guaranteed to be sound, healthy, and not prone to growling.

And here’s a photo of Milo displaying his “grrr face” at home. 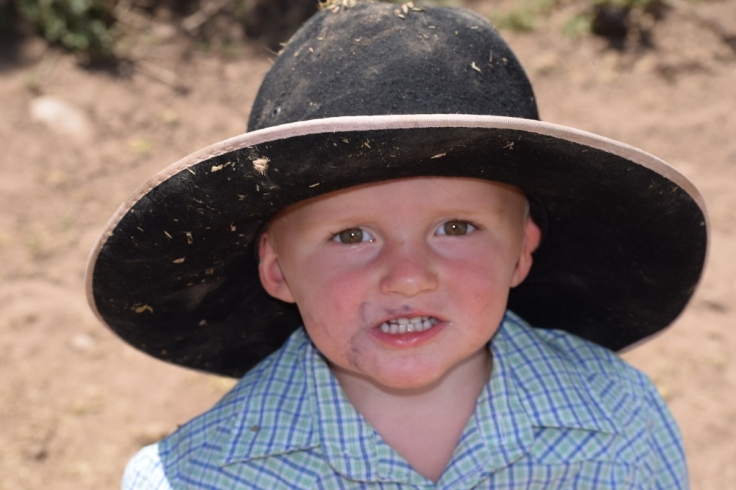 4 thoughts on “Growling In Public”