The kids and I recently spent 5 hours at the local zoo, and I’m happy to report that no one fell into the gorilla cage. That’s primarily because the Heritage Zoo in Prescott, Arizona doesn’t have a gorilla cage. It houses mainly native species such as coyotes and black bears, plus a few displaced exotics, including a Bengal tiger and a Capuchin monkey.

The first item on our itinerary was observing the tiger eat lunch. When we approached the fence, the tiger growled and fixed its menacing stare on us. My two-year-old son Milo frantically whined and held up his arms, because everyone knows you’re safe from a tiger attack if you’re being cradled by a 119-pound woman. I obligingly picked him up, then looked over my shoulder for someone to pick me up. That tiger was seriously fearsome, and I wondered if the chain link fence surrounding her enclosure had recently been inspected for structural integrity.

“Welcome to the tiger exhibit,” said the zookeeper. “Our resident big cat is named ‘Cassie.’”

Then he stuck his hand through the fence, and Cassie turned her head and bit it off at the wrist.

Just kidding! Cassie “chuffed,” which is a big cat’s version of purring, while the zookeeper scratched behind her ears. She then laid down and rolled over for a belly rub. Cassie’s attitude suddenly changed, though, when she was presented with lunch. She attacked the bin of raw meat with the same fervor I reserve for eating Reese’s Pieces when my kids are in the other room.

We human animals ate our lunch near the livestock petting area, which was home to several free-range chickens. A layer of dust covered the picnic table, and dried bird droppings decorated the benches. Three hens circled our legs and clucked, trying to coerce us into giving them a bread crumb, potato chip, spare pocket change, or perhaps actual cash money. I was ready to give them the keys to my car if they would just leave me alone. As I tried to enjoy a homemade cookie, I noticed a large, still-wet blob of chicken poop near my foot. The fact that I paid money for this experience is proof of the economic prosperity of our great nation.

After we ate lunch, Milo spent the better part of an hour brushing small farm animals. I encouraged this behavior, because if you can’t ride home in a car that smells like a goat, is there really any point in going to the zoo?

I finally pried Milo away from the goats, washed his hands, and enjoyed some high-quality people watching. As a desolate ranch wife who sees more javelinas and mule deer than human people, it was a real treat to see what fashions other women were wearing. One outfit I saw a little too often that revealed a little too much was a too-sheer sweater paired with too-tight leggings and too-tall boots. I noticed there weren’t any other moms copying my personal style: thrift store jeans and Memory Foam slip-on shoes with bacon grease on the left one.

People-watching aside, I was so completely captivated by the tigers, leopards, monkeys and boa constrictors that when I got home, I told my husband that we needed to go to Kenya immediately. Because that’s totally doable on cowboy wages.

“If we don’t eat for three years and skip Christmas presents for ten, we can probably spring for a weekend at SeaWorld,” he replied.

“Good enough,” I said. “Now put down that cookie.” 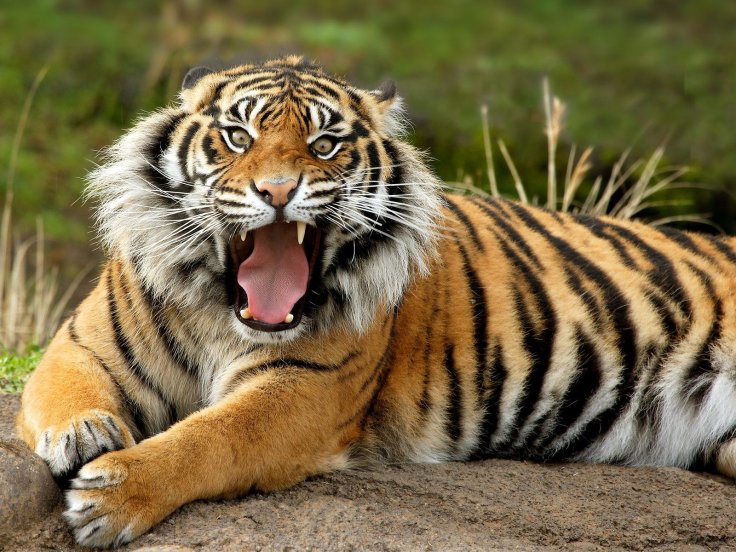 2 thoughts on “Lunch With A Tiger”