Historically, American cattle ranchers haven’t participated in the Winter Olympic Games, because it’s cold and we don’t want to. The water troughs are froze up, the horses are haired up, the wood box is filled up, and our feet are put up on the couch while we sip hot coffee and hope for a thaw. Like the rest of the world (well, the half of the global population that watches the Olympics, anyway), we will be glued to our TVs, watching amazing athletic feats and trying to figure out how the heck curling qualifies as a sport.

Sport or not, this curling dude looks fierce. 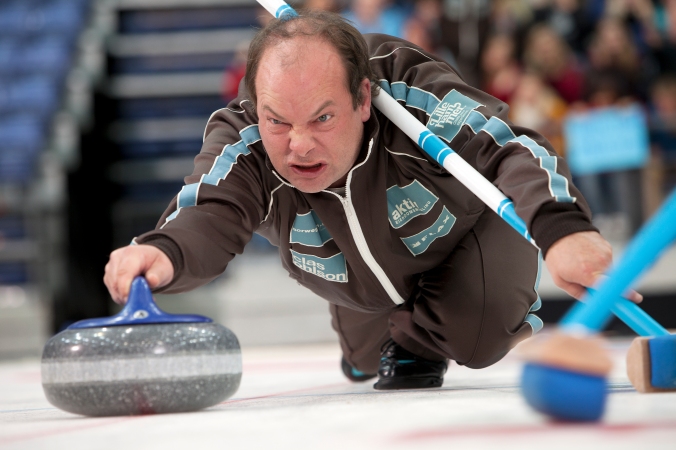 The winter Olympics features fewer than half the sporting events as the summer Olympics. This is because despite the valiant and much-appreciated attempts at global warming as implemented and promoted by the Sierra Club, Greenpeace and the state of California, winters are still cold. And when it’s cold, most sane people don’t want to leave their houses. Sports are much easier to play in the warm summer months, when walking outside in a spandex bodysuit doesn’t cause your nose hairs to freeze together.

The 2018 Olympic Winter Games will take place in PyeongChang, South Korea. Online sources report that early ticket sales have been slow, which is understandable because most potential spectators are aware that the temperature will be cold. The average February temperature for South Korea is somewhere in the neighborhood of -10°C, which sounds absolutely terrible but actually equates to somewhere in the 30s on the Fahrenheit scale. This also brings up why we don’t use Celsius in America: Frequently seeing wintertime temperatures preceded by a minus sign is too scary.

Absent en masse from the winter Games will be the Russians, whose team was officially banned last year by the International Olympic Committee (IOC) after investigations uncovered a large-scale doping scheme among its athletes. The Russian official who went public with details of the cover-up fled Russia after he learned that Vladimir Putin wanted to give him a noogie with a machete. In his absence, the government issued a warrant for his arrest, admitted Russia might have a doping problem, said the rest of the world had a doping problem, and the Olympics would totally suck if Russia wasn’t allowed to participate. Truly, it is this spirit of cooperation and sportsmanlike conduct that the global community hopes will endure each time the Olympic torch is passed.

Don’t let the torch go out, Russia! Keep the flame burning, Russia! Please don’t give me a noogie with a machete, Mr. Putin.

After much deliberation that included flipping coins, the IOC eventually decided to allow 169 Russian athletes to compete in the 2018 Games, as long as they agree to only utter the phrase “Long live Mother Russia!” between the hours of 11 p.m. and 3 a.m. and don’t take performance-enhancing drugs while physically in the starting gate. The Russians are excited to compete, even though they know it will be cold

The Russians aren’t scared of the cold, though, because their mother country has more snow-covered tundra and reindeer than Santa Claus himself. Acquiring frostbite on at least one extremity is required for admittance into a state-run kindergarten class. “Come for the vodka, stay for the hypothermia” is their official tourism motto.

There may or may not be stunning upsets, major wipe outs, and tears on and off the podium during the 2018 Winter Olympics. But, one thing is certain: It will be cold. If you don’t like that, feel free to contact the folks at Greenpeace. They’re working on it.

One thought on “Spoiler Alert For The 2018 Winter Olympics: It Will Be Cold”