Last week, we took our first-ever family vacation to Las Vegas. It’s pretty tough to pry my cowboy husband off the ranch, unless he’s headed for a ranch rodeo or team roping, but I finally convinced him to go by booking a nonrefundable hotel room. For the first time in five years, we were recreating without dirt, livestock, and dry camping in a range tipi. I was ecstatic.

For our inaugural trip, we chose Las Vegas, Nevada, which is a huge city in the desert that sucks up all your money. To save time and get a jump start on wasting cash, we threw twenty-dollar bills out the window as we drove down Interstate 40 between Kingman and Boulder City. We weren’t too worried about going broke during out trip, because we were broke before we left.

Sin City might seem like an odd choice for a family with two small children, but we discovered it offered plenty of entertainment choices for a five-year-old and a two-year-old. There was an indoor amusement park, carnival games and clown acts at Circus Circus; exotic marine life at Shark Reef Aquarium; and all the donuts they could eat at Krispy Kreme.

For both children, the highlight of the trip was riding the escalators. They called them “moving stairs,” just in case their cowboy boots didn’t alert onlookers that they were from the country. We should’ve just stood by the slot machines at Circus Circus and let them ride the moving stairs in a loop for a couple hours. Instead, I insisted we buy them all-day passes to Adventuredome, a huge indoor amusement park where five-year-old Grace could ride fewer than half the rides and two-year-old Milo refused to ride anything except the carousel. 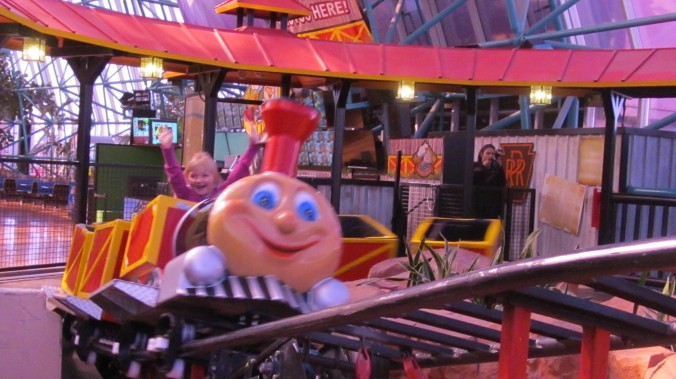 Besides riding a model horse in a gentle circle, Milo enjoyed carrying a bar of hotel soap around in a disposable cup. He also liked pouring all his Teddy Graham crackers out onto the ground, then picking them back up.

Due to his simple tastes, Milo was easy to amuse while waiting for the circus acts to begin – as long as I didn’t freak out about him eating Cheez-its off the floor. Since I didn’t have a smart phone, I had to pass the time by checking the Facebook of the person sitting beside me. I thought that if I was really sneaky, I could quickly log into my own Facebook and scroll for a couple minutes while they were distracted by talking to a companion, but alas, no one ever looked up from their phones.

We also went to the Shark Reef aquarium at Mandalay Bay, where the kids briefly glanced at each tank before announcing “Let’s go look at something else.”

“Your father and I paid $70 to get the family into this aquarium. You will look at the fish for longer than 3.7 seconds.”

Grace enjoyed the touch tank, where she could pet rays, crabs, and other underwater critters as they swam by her. Milo refused to dip a finger in the water. He told us the animals would bite him.

“You live with your sister; why would that scare you?” I asked him.

His big green eyes revealed no answer, but he continued to refuse to leave his comfort zone. I envision lots of ranch rodeos with his dad in his future.

Just look at those happy smiles! Okay, one happy smile. Hey, at least I got the guys off the ranch, right?