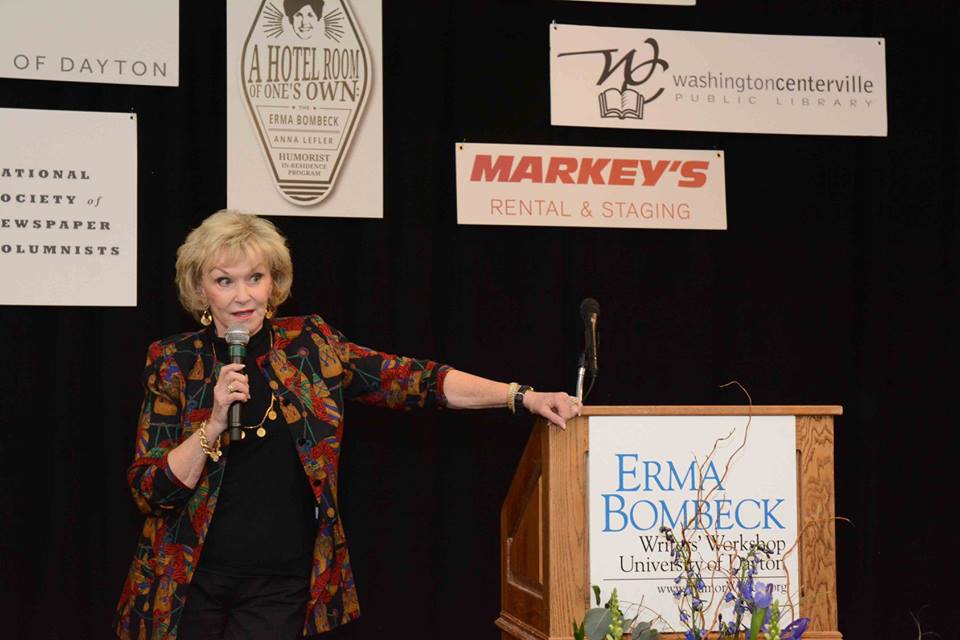 I recently left my home on a remote cattle ranch in Arizona to attend a writers’ conference in Ohio. I arranged for childcare, stocked the house with snacks and diapers, and worked a part-time job for six months prior to pay for trip. While at the Erma Bombeck Writers’ Workshop (aka “Erma”), I hoped to further my freelance career and connect with other humor writers. Also, my two young kids don’t sleep through the night, and I really wanted a nap.

The cross-country trip was fraught with unpredictable weather, time zone changes, and a review of basic driving skills. I can drive down 50 miles of dirt road with two kids and a load of groceries. I can safely drive through a cattle herd. But I am at a major disadvantage when it comes to maneuvers like “merging,” “left turns,” and “identifying the correct exit.”

I ignored my intuition while driving to the airport, because I have the sense of direction of a boiled turnip. I once got lost in a public restroom. I circled the hand dryers for ten minutes before I realized they were on a center island. Following the customary road rules of roundabouts, I signaled and exited toward my destination without checking for oncoming traffic.

I stubbornly followed my MapQuest printout en route to McCarran International Airport, even when it directed me in the opposite direction of the airport signs. Then I noticed that I was driving the same direction as the ascending planes. During a long stop light, I turned on Google Maps. The first audio direction was “Make a u-turn.”

I eventually found my way to the airport parking lot. Two shuttle rides later, I made my way to the ticket counter just in time to discover that I had missed my flight.

When I finally arrived in Dayton, I enjoyed a discounted room rate due to booking with the conference code. This was fortunate, because the normal nightly rate was half our monthly grocery bill. The king-sized down pillows, fluffy comforter, real drinking glasses, and huge flat screen TV that said “Welcome, Mrs. Jolyn Young” every time I turned it on were worth every penny that could have been spent on fresh fruit and whole milk for my children.

I told my husband that I had a new standard for hotel rooms.

“Yes,” I replied. “But I have also seen what’s on the other side of the Super Eight, and there’s no going back.”

“All right, I’m sure we can swing that,” he said. “For transportation, what color unicorn would you like to ride?”

During my stay at the Even More Super Than Super Eight, I ordered room service because I wanted to be fancy. Then I had to Google what to do with the dirty dishes, because, as it turns out, I am not fancy.

Pro tip: Put the dishes in the hallway. On the floor. It may seem tacky and strange to those of us who are accustomed to cleaning the floor, but that is the custom of the fancy people.

I enjoyed mingling with the other 350 conference attendees, all of whom came from more populated regions than myself. I learned that the only icebreaker I needed to strike up a conversation with a fellow conference attendee was, “I live down 50 miles of dirt road and 2 ½ hours from town.”

One woman responded to this fact with an emphatic “F— no.”

Then we had a fistfight.

Not really. But, she was a redhead, so it could’ve happened.

There was no fistfighting at the conference (to the best of my knowledge), just a whole lot of laughter. Here, attendees and presenters enjoy Rita Davenport’s keynote address. 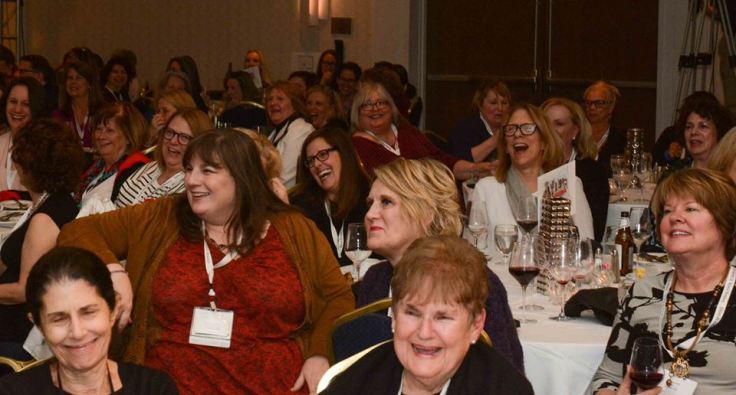 While at Erma, I took the fabulously funny Wendy Liebman’s stand-up comedy class. I have never performed stand-up before, but in my mind, I’m basically Chris Rock. If it wasn’t for writer’s block and paralyzing stage fright, I would totally be a professional stand up comic.

So many funny ladies in one picture, including Leighann Lord (second from left), Wendy (center), and Kathy Kinney (second from right). 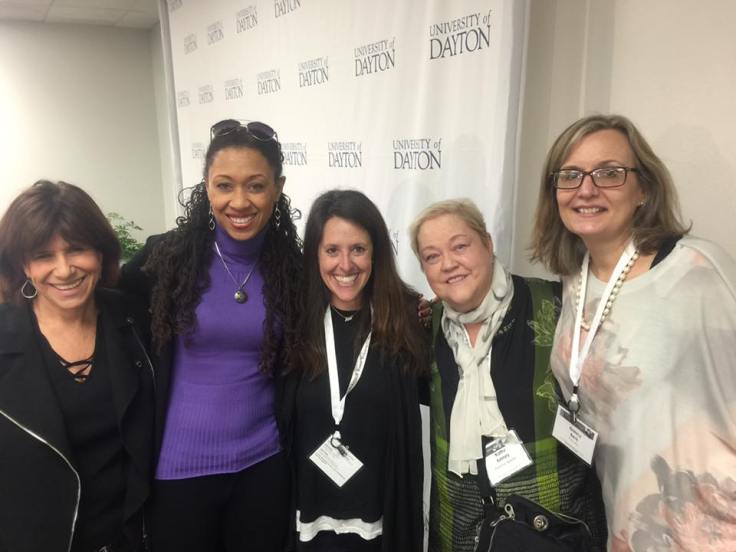 As part of the class, each student took the stage and told a joke. Wendy handed everyone a pre-written joke. Some students performed their own jokes. I opted not to, because I suddenly realized that I had never written a joke, told a funny story, or received a laugh from anyone besides my husband. And I’m the only person he is allowed to sleep with, so his opinion is null and void.

My palms were sweaty and my hands were shaking before my turn onstage. I mentally transported myself to a more pleasant setting, like a pelvic exam. I took the microphone, told the joke, and the audience laughed. The joyful sound brought no relief.

Of course they laughed, I thought. I told a joke written by a professional humorist. Duh.

I was just relieved to leave the stage and retreat to the safety of the audience, where there was safety in numbers. One truly is the loneliest number, especially when standing on a stage with a roomful of people looking at you.

Back in my seat during the other classes, I was thrilled to learn from dozens of smart, sane women who had achieved professional success by being funny. As a fledgling humor writer, I am often plagued by thoughts like, What in the heck am I doing? I left a full-time journalism job to pursue a byline as a humor columnist armed with nothing more than a five-year-old laptop and my husband’s encouragement. That was dumb. The one time I take his advice, I begin my speedy descent into literary obscurity and we lose half our income.

Meeting this wonderful lady and accomplished columnist, Suzette Standring, was a highlight of the conference. Her email encouragement to me, a writer she’d never met, helped me decide to not give up on my column last summer. 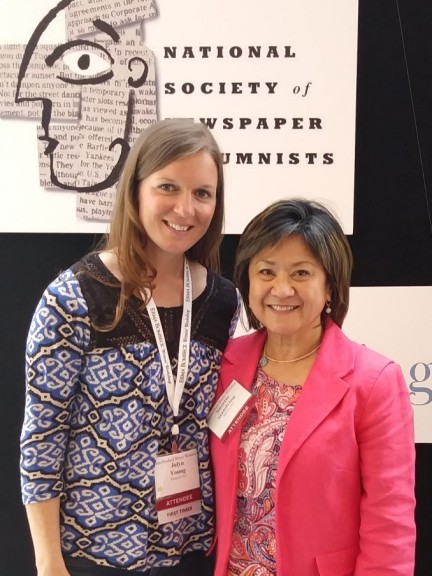 Accomplished actress, writer, and all-around funny lady Kathy Kinney is a successful funny lady who was a keynote speaker and panelist. She is best known for playing Mimi on The Drew Carey Show. I am happy to say that was she hilariously inspirational, but disappointed to report that she did not wear electric blue eye shadow.

Rita Davenport is a former TV cooking show host, longtime friend of the Bombeck family, and a powerfully petite Southern belle who slayed Friday night’s dinner crowd with her pointed, polite brand of comedy. She dated Dolly Parton’s husband before he met Dolly was the inspiration for Dolly’s song “Jolene.”

I was fan-girl excited to meet the real Jolene, because more than one guy had gotten drunk in college and sang that song to me. That’s not even my name. I was happy to learn that there is indeed a real Jolene, and that isn’t her real name, either.

Will the real Jolene please stand up? Yes, she will. And here Rita is, in all her hilarity. 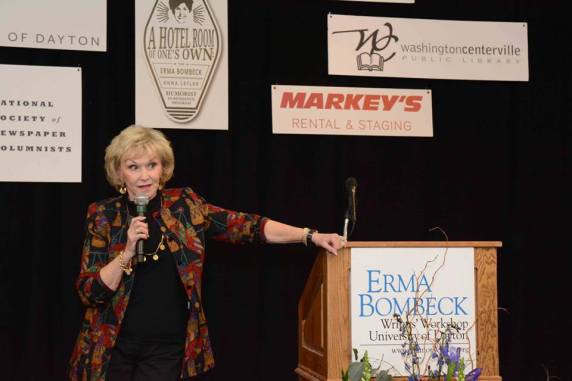 I even met a woman who followed my blog. I was so excited that I asked for her autograph and insisted we snap a selfie together, just so I could prove that my readers actually exist.

I enjoyed my big trip, and my family was excited for me to return home after five days. This was mostly because they ran out of coffee.

Also, the dog pooped in the house. But nobody had seen it, because household messes are invisible to everyone but Mom.

Back on the ranch, the smell was terrible but the company was good. And as long as my left hand wears his ring, I’m guaranteed to get a laugh from at least one person. 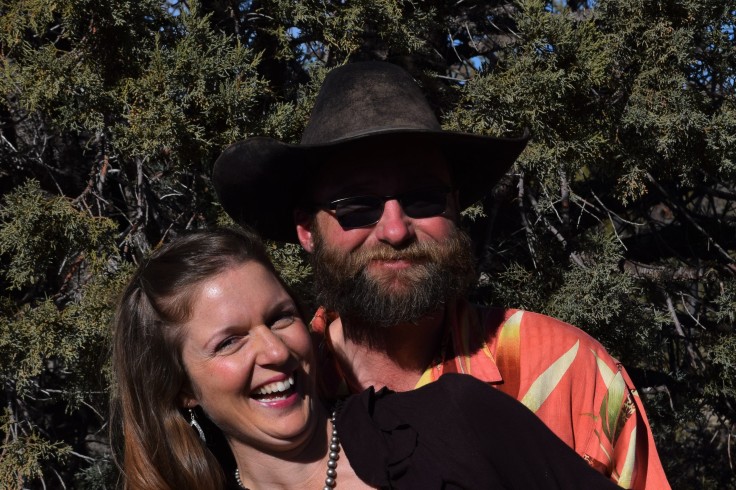 In this case, that person appears to be myself. But Jim was smiling really hard, which is the stoic cowboy’s equivalent of a belly laugh.